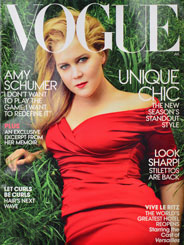 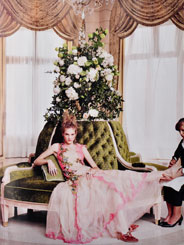 Our owner and President featured in an article by Beth Bernstein, author, related to Mother's Day gifts. It showcases an emerald intaglio and yellow gold Three Graces ring. 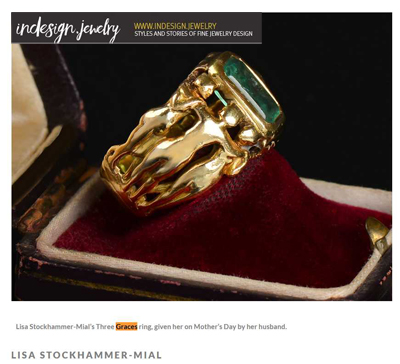 January 2015 - Our jewelry is featured all throughout the book, "I Love Those Earrings" by Jane Merrill with Chris Filstrup. 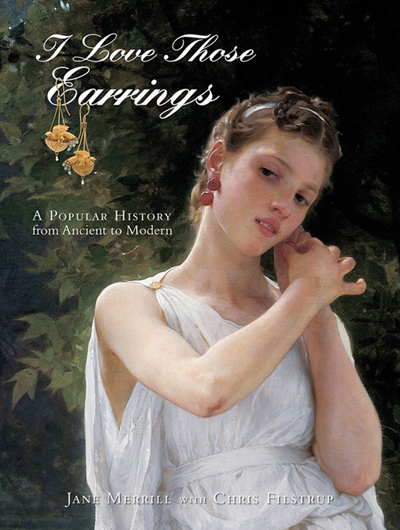 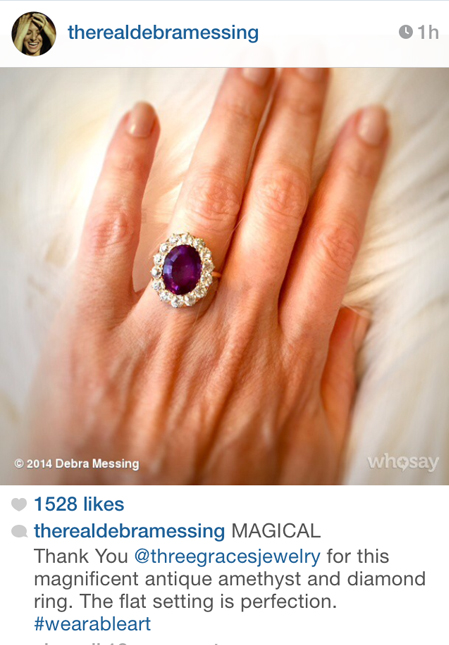 Many of the first shots show Carey's headband! It's ours!

Books! Gold, Platinum, Palladium, Silver & Other Jewelry Metals. By Reneé Newman, GG. Our jewelry photographs and information were highlighted in a number of sections. A highly respected author of many reference jewelry books we heartily recommend. More about the author. See our jewelry and reference photographs on pages 13,18, 20,73 and 92!

VOGUE Magazine - September 2012. Click here To View All the Photographs.

JCK Magazine - August 7, 2012. Liked our infographic on the most expensive jewelry and gemstones ever sold at auction.

Marth Stewart's Wedding Blog - May 4, 2011 - Martha Stewart loves us! Some of our antique engagement rings are featured in an article about choosing a unique ring perfect for a gal who "marches to the beat of her own drummer."

Rapaport Magazine - 2011 October Issue. Our owner, Lisa Stockhammer-Mial is quoted throughout the article entitled "Fade to Black" which discusses the art of Victorian mourning jewelry.

Engagement 101 Magazine - 2011 Fall Issue. Two of our rings are featured in the "Celebrity Trends" article. The rings chosen reflected the coveted jewels of Jessica Simpson and Kate Middleton.

Adorn - India's First Luxury Jewellery Magazine- April 2011. Three of our items are featured in an in depth article that explores the origin and history of filigree jewelry.

Rapaport Magazine - March 2011. Our owner, Lisa Stockhammer-Mial is quoted several times alongside our very own fabulous Victorian diamond brooch in a cover feature about the allure and softness of Victorian-era diamonds.

Lucky Magazine - January 2011. Named one of the top pics for Antique & Estate jewelry! And one of our paste brooches is featured in the article "A City-by-City Guide to Estate Jewelry".

TheSpruce.Com (formerly About.Com) - November 2010. Our owner, Lisa M. Stockhammer-Mial, was quoted and consulted, and two of our pieces were used for illustration, for an educational article titled "Identifying Victorian Black Jewelry." Click here to read the full article.

Rapaport Magazine - October 2010. The Three Graces is quoted in an article about the strong demand for pearl jewelry despite economic ups and downs.

TheSpruce.Com (Formerly About.com) - August 2010. One of our rings was selected for use on the popular website TheSpruce.Com in an educational article about Bog Oak. You can see our beautiful Antique Victorian Bog Oak and Pearl Ring in the "More Images" section of this article.

Your Engagement 101 - April 2010. The Three Graces is quoted in a blog about Christina Applegate's engagement ring.

InStyle Magazine - March 2010. Victorian Turquoise and Gold Earrings were chosen to be featured in the Beauty & Style section.

The Magazine Antiques - February 2010. Article on Mizpah Jewelry using an example of our jewelry.

The Book Answers to Questions About Old Jewelry, C. Jeanenne Bell. Seventh Addition. January 2009. Cover photo and over thirty (30) photographs of our jewelry are featured throughout the book all from our past and recent collections!

Adornment, The Magazine of Jewelry & Related Arts - Spring 2008. Article on examples of "White" Jewelry in the West ranging from the late fifteenth century to the present day. Rococo aigrette, England or France, ca. 1740, featured (top left).

In Style Magazine - November 2006. Page 461. Life & Home - Online Shopping. Where the Pros Shop on the Web. "Without a doubt this is one of the best antique jewelry sites. Images are beautiful and accurate."

Canadian Jeweller Magazine - November 2006. The Shape of Things by Jessica Bent. Article concerning the evolution of the ring.

For Me Magazine - September 2006. Page 60. "The Other Way to Invest". Great article examining other ways of investing besides the traditional stocks and bonds route. Jewelry was highlighted (among other avenues) and The Three Graces was the featured quote.