Cuts and settings for gems and diamonds have changed as much in the history of antique jewelry as the political and social landscape of the centuries has. Well into the early 19th century all antique diamonds were hand cut and polished. Technology and machines capable of near perfection were not yet available. Thus, antique diamonds are known for the fact that each one is slightly different in shape and, often, facet size and shape. Only in recent generations have we sought out diamonds with perfect facet structures and shapes possible only by means of our modern equipment and technology. Yet, antique diamonds often possess brilliance, life and character with which no modern diamond can compare.

Antique diamond cuts, like the vagaries of fashion, have gone through periods of great change. Different centuries and eras favored different cuts of diamonds and of gems. Also, as tools and knowledge evolved, so too did the cuts of diamonds. Diamonds and gems are polished or faceted to bring out the natural color and refraction within each stone. Minimizing flaws or reducing the less than ideal qualities of a stone is also an important factor in shaping a gem. Prior to colored gemstones being faceted, most were cut en cabochon (a rounded convex top and flat bottom). We see cabochons in antiquity well through the Renaissance and many gemstones today are still cut in this fashion.

Below is a look at the evolution of the cut diamond beginning around the Renaissance period.

One of the earliest cuts of diamonds was the pointed diamond, sometimes referred to as a writing diamond. Polished with very few facets, almost the entire original eight sided crystal of the diamond is left intact. There are usually four facets that lead to a pyramid shape. Popular in the 15th - 16th centuries, this cut flourished for generations. 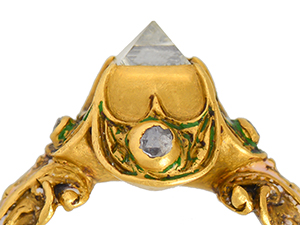 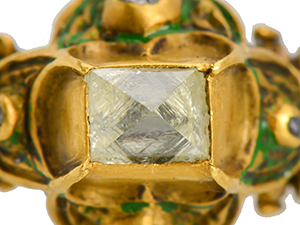 A table cut diamond is so named for the simple fact that the top is flat, like an ordinary table. Each of the four sides has a simple facet similar to a bevel. These diamonds, although found in the 16th century, were most often utilized from the 17th through the earlier 18th century in jewelry. Below is an example of a late 17th century cross with table cut diamonds set into silver. 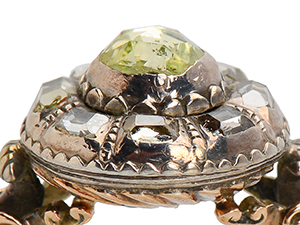 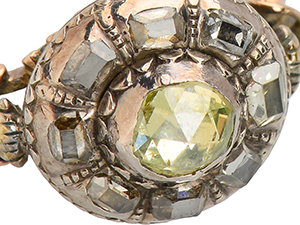 After the table cut, the rose cut became a newer and more fashionable method for cutting diamonds. Found in the 18th and 19th century, the cut fell out of favor when more brilliant cuts took hold. However, rose cuts can be found well into the late 19th century (often in Georgian revival jewelry) and even up to the early 20th century.

There are two basic forms of rose cut. A single rose cut and a rose cut with more layers of facets. A single rose cut has one single layer of facets as in the surround of smaller diamonds pictured below. Other rose cuts have two layers of facets as in the center stone in the ring shown below. Almost all rose cuts are flat on the bottom. Some double rose cuts are known as Dutch rose cuts and tend to be very high (or deep) with two (or even three) rows of horizontal facets. Facet structures can vary from very naive to more structured. Antique rose cuts are always out of round. In other words, their perimeter is never perfectly round. If you find a diamonds that is perfectly round, it is usually a modern, machine-cut diamond made to look like an old diamond. 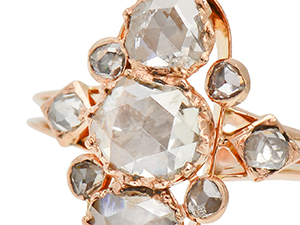 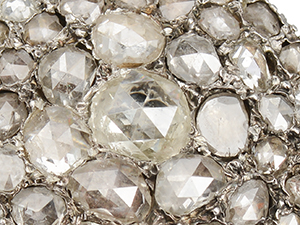 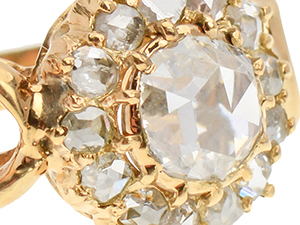 This is a cut of diamond with 18 facets in total and a very large table. It is often used in the late 19th and early 20th century well through modern times and many times for smaller, accent diamonds. 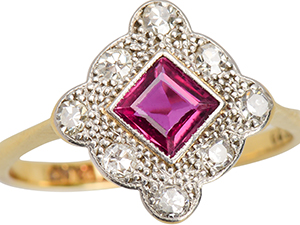 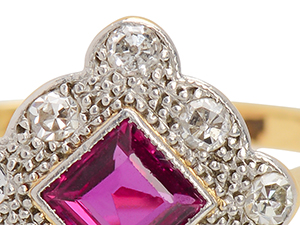 Although their roots begin in the 17th century, brilliant cut diamonds came into wider use in the 18th century. While rare, examples of jewelry set with brilliant cuts from this time do exist although many of any size or importance we reset to suit changing styles. In the 18th and well into the 19th century the most common form of brilliant cut was the old mine cut diamond. Cushion cut diamonds are another example of a brilliant cut.

Cardinal Mazarin has a diamond cut named after him. The Mazarin has thirty four (34) facets and is an early form of brilliant cut similar to a cushion cut. The Peruzzi cut was also another type of brilliant diamond. So named for Vincent Peruzzi around 1700 it contains 56 facets. Brilliant cuts have many more facets than rose or table cuts as well as having a different facet structure. Faceted as well on the bottom or below the girdle, thus often exhibit more brilliance than their earlier counterparts. Old brilliant cut diamonds flourished in the 18th and 19th centuries and even into the early part of the 20th century when they were replaced by a modern brilliant cut.

Old mine cut diamonds were a form of brilliant cut with a variety of facets structures, and with the outside perimeter being out-of-round often more square or rectangular in shape. Again, is all hand cut without the use of precise machines, each one is as individual as the people who cut them. Old mine cuts are often seen in 18th and 19th centuries in Georgian and Victorian jewelry. Key features include an open culet and a small table. Often they have an open culet where the facets come together at the bottom and leave a small flat surface. 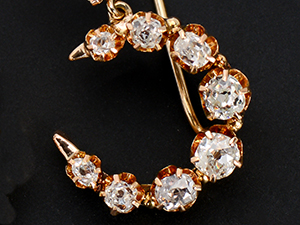 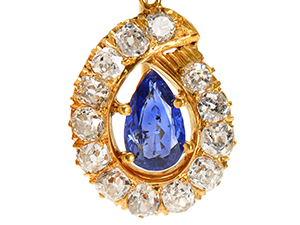 Old European cut diamonds are a form of brilliant cut diamonds with a variety of facets - usually fifty eight (58) with the key features of a small table, an open culet and a round perimeter or shape. The invention of the power driven bruting machine (patented in 1891) allowed the girdle (or perimeter) to be round rather than irregular. Unlike the old mine diamonds, these are closer to what we see today in modern diamonds. 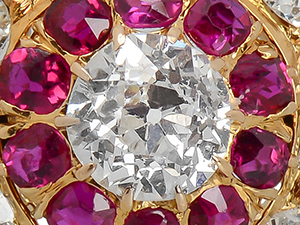 This diamond is a brilliant cut diamond with a square shape with rounded corners. An example below shows its hand cut nature and open culet. Sometimes this diamond is referred to as pillow top or buff top cut. 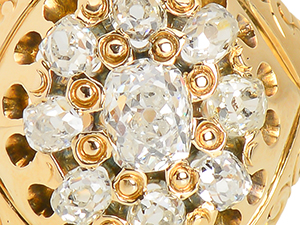 Can you identify them? 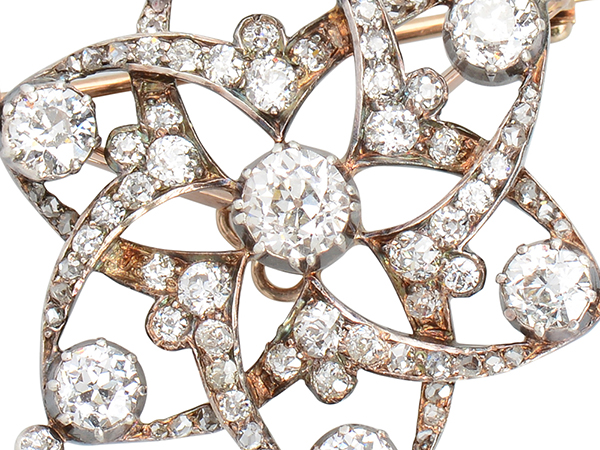 Modern brilliant cut diamonds are those which are cut to maximize the brilliance of each stone. The most common form exhibits fifty eight (58) facets and has been used since the first part of the 20th century and continues today. Numerous facet structures are employed and every day new cuts are being developed to enhance a diamond’s extraordinary inherent refraction and shimmer. Shapes range from the traditional round cut to all manner of configurations including emerald cuts (rectangular in shape), heart, oval and marquise, teardrop or pear shape, and square cut as well as non-traditional forms. No matter the shape, the diamond still reigns supreme in its ability to arouse desire and strike the senses. 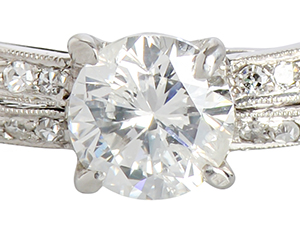 Crown - the top portion of the diamond from the girdle to the top.

Culet - the bottom tip of the diamond. In modern diamonds where all the facets come to a point. In earlier diamonds this is a small flat area as the facets do not all meet at a perfect point.

Facet - one or many flat surfaces on a polished diamond or gemstone.

Girdle - the outer most edge of a diamond.

Pavilion - the bottom portion of a diamond from the girdle to the bottom tip of a gem.

Polishing - the act and art of faceting gems often referred to as cutting or polishing.

Table - the flat surface at the top of the diamond.