Known since the time of the Egyptian Pharaohs, niello (also referred to as tulo) is both a process and a substance that was used in jewelry and the decorative arts. Resembling black enamel, niello stands out with its distinctive graphite, lead gray metallic sheen. It is a lustrous almost blue-black material that has been used as technique to heighten and enrich objects that have been engraved, chased or etched. 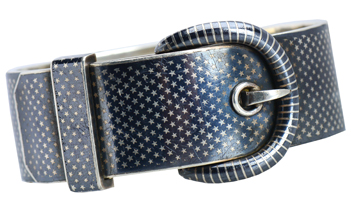 The contrast of the inlay against matte or polished metal is striking. The earliest examples of the art belong to the Roman period of the 1st century.

To this day classical, medieval, and Renaissance recipes for the mixture have survived clearly indicating the high regard in which it was held throughout the centuries. This artistic process is virtually extinct in part due to its truly time-consuming and arduous nature.

Some of the major centers of production resided in Russia, France, Italy and England. Later Thailand became known for its 20th century examples.

In the Victorian era and well into the Edwardian period (approximately 1880-1920), this process experienced a resurgence in jewelry. Long guard chains in both niello, silver and rose gold over silver were worn by many of Victorian dame. Niello also accented all types of jewelry including bracelets, brooches and watch chains. Whimsical fobs with horse shoes, inset with compasses, good luck symbols and the like were all produced.

Lockets were favored often round or oval in shape with all over patterns that might include stars, Greek keys, polka dots or geometric patterns and even flowers or floral motifs. With the rise of photography, these lockets often held images of loved ones and family members within their interiors.

Objects and jewelry from Thailand expanded the souvenir market during the earlier to mid-20th century. Retro pieces from the 1940s were purchased and carried home during the war. The most common decorative elements were dancing Siamese women or goddesses and even Buddha imagery.

Russian traditional objects such as kovshi (kovsh) items, cups, boxes, spoons, but also cigarette cases and belt buckles incorporated a variety of designs. Rings, bracelets and belts continued to find popular audiences. Words in Cyrillic such as souvenir, motifs such as famous architecture and monuments, soldiers, and geometric patterns all lent themselves to the embellishment of their niello ware and jewelry.

Collectors and enthusiasts today fall in love with the designs that have an edge to them. Today they seem almost modern in their bold geometry and unusual patterns and shapes. Whether you desire a Victorian bangle, or a wrap-around chain, the style blends well with stacking and layering contemporary with vintage. View other types of Victorian bangles and bracelets or those from all eras to gain perspective of the scope of designs created.