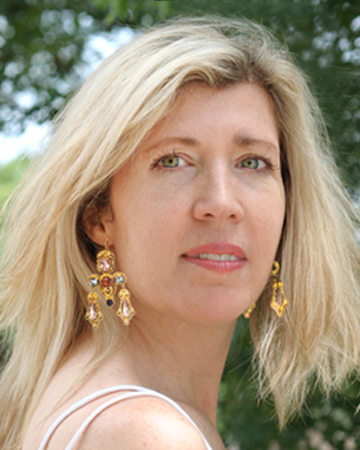 Establishing The Three Graces in 2002, owner and president, Lisa Stockhammer-Mial, has been involved with antique jewelry for more than 30 years as a collector, buyer and historian as well as business owner. Her field of expertise ranges from the Art Deco period (1920-1935), to Edwardian era jewelry (1890-1915) as well as Victorian jewelry (1840-1890), Georgian jewelry (1714-1840), and even earlier. Gemology is another area of specialization, with a full gemological laboratory on site for the identification and grading of diamonds and precious and semi-precious gemstones.

She is a member of The American Society of Jewelry Historians, the Women's Jewelry Association and a regular lecturer at the annual Antique Period Jewelry and Gemstone Conference and has lectured at the renown GIA (Gemological Institute of America). Jewelry from The Three Graces has been used in a number of books and scholarly publications and pieces have also been exhibited in museums and are included in the permanent collection of the Newark Museum. She holds a BFA degree in Art & Art History from Rice University.

Both the fields of antique jewelry and gemology provide an exhaustive list of areas for further examination. Constantly researching and reading scholarly texts and publications is one of the major sources of information. As important is networking with other dealers and experts. "A veritable encyclopedia of knowledge is often right next to you in a colleague's expertise" states Mrs. Stockhammer-Mial. "Striving to stay ahead of the ever-expanding reproduction market, every travel and buying opportunity is also one of learning from others in the field and is a vital link to a wellspring of knowledge."

Frequently traveling throughout the United States and the British Isles and Europe in search of pieces that enhance the collections that are for sale, Lisa Stockhammer-Mial balances her time among seeking the ultimate jewelry and objects to present, overseeing the burgeoning business operations and establishing and maintaining personal relationships with her clients the world over.

Born in New York, she has also lived in Southern Florida, New Jersey, Boston and now Texas - as well as overseas in several countries. Her background is in the arts and in architecture, earning a B.F.A. degree in Fine Art from Rice University in Houston, Texas.

Traveling and living extensively throughout the world--Asia and South East Asia, Europe, Mexico, South America, Africa and even Antarctica - has been one of the more profound influences on her life and work. She has lived in Southern India for six months; Taiwan for a year, and South Africa for over a year. She has visited 24 countries (and growing) throughout her lifetime and the observation of the culture and the study of the regional jewelry in those locales has been a solid foundation for her role as head of The Three Graces.

Her mother served as her wellspring of passion for jewelry since she was a very young girl. She had collected jewelry of all sorts since from grade school and into college and beyond. One of her favorite memories at about age six is traipsing alongside her mother, Betty, to the family jeweler in Albany. Since they knew her mother well, the owner allowed Lisa to go behind the counter and take out whatever she wanted to try on. While she was just tall enough to reach in, and although shy, she quickly slid open a case to plop on her finger an enormous and sparkling gemstone. Heaven. She is married and lives outside of Austin, Texas. From the heart, one of her greatest passions is the adornment of the human body.

Her business skills were honed in a variety of settings as an Operations Manager for a major insurance company to Business Manager for a not-for-profit school, and with exposure to PR and additional critical business aspects in other endeavors. Ever entrepreneurial, she also designed and manufactured her own line of costume jewelry and later imported ethnic antique and modern jewelry from Asia.

In 2002 realizing the power of the internet, she began a small shop online. Right away the vision was clear. A website designed to her specifications and visual style. And a website meant stating in writing what she was offering to the public. And that meant knowledge. So she continued her education with books, conferences, study and utilizing the wealth of knowledge in the industry through other historians, dealers and appraisers.

She now lectures across the country and has been featured in books and the New York Times, and continues her education to keep the core of integrity of The Three Graces intact.